“The LORD’S lovingkindnesses indeed never cease, for His compassions never fail. They are new every morning; Great is Your faithfulness.” – Lamentations 3:22-23

We hope you are all doing well and enjoying the end of summer. It has truly gone by so quickly for us. But we are in Thailand so the weather will still be like summer the rest of the year. Not only have there been many activities and projects, this month has been more emotional than others as you’ll read below. In addition to that, we have just now finished moving to a new house, though we are far from unpacked. The move itself was rather uneventful but it did provide us with a great reason to clean out a lot of clutter that we had accumulated over the years. Tiff has taken to the new house because it allows her to exercise her green thumb. She has already planted a good size garden and talks of the coming harvest already. This of course fits nicely in the theme that we are called to be labors in His harvest.

I also went to a hospital for my back again. This was a different facility that I had heard some good things about. Unfortunately, the staff didn’t seem to have much experience or knowledge on treating my injury and basically just gave me a massage. Thankfully, I have had some relief from the pain as the exercises and stretches I’ve been given have helped relieve the irritated nerve. They don’t fix the problem but they do help and I appreciate your continued prayers for this matter.

We also had a friend come visit us from the states and really had a great time of ministry and fellowship. Much of this time utilized his gifting with counseling and experience in healing ministry. Even with a busy work schedule, we were still able to sneak in an elephant ride and a burger at my favorite restaurant.

As I just mentioned above, this past month my friend Joe joined us along the border at Grace House, a bible school, and in the village. A big part of his ministry involves helping others get through all kinds of different hurts, unforgiveness, guilt, and emotional pains. These things are unfortunately are all too familiar in the lives of the refugees and people of Burma as a whole. Because of the need, we were able to share and teach at a local bible school. Not only did the students get to learn about healing ministry for serving others, but they all participated in the process too. Many were helped and received healing themselves, and one boy named Nu who came there because of his friend received Jesus as his Lord and Savior. So it was a very fruitful week at the school!

Teaching at the Bible School and Ministering to Nu

In addition to the school, we went to Grace House each day and spent time with the kids. I mentioned in the previous report about Canaan and Cherry losing their mom and so the villagers had just had the funeral before we arrived. We were told she had some form of heart disease. She had been sick for quite some time and it was difficult and expensive to get the needed medical care. It was an especially hard time for the both kids and even more so as Thailand’s Mother’s Day was later that week.

With that being the situation, we did several activities with the kids to lift their spirits and even had a special Mother’s Day celebration at Grace House for the all the kids to be a part of. And it was a great opportunity to thank the house mom who sure is a blessing in taking care of all the children. 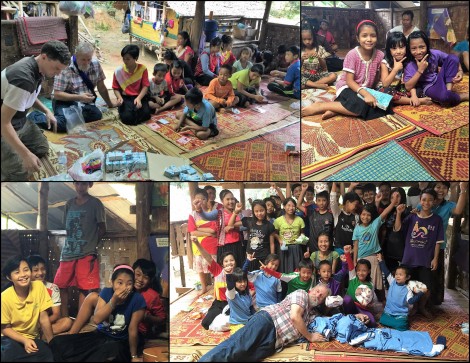 Hanging out with the Grace House Children

Towards the end of the Thank You ceremony, as the last song was finishing up, almost all the kids were in tears. It is still hard to grasp the fact that so many of them have been separated from family through hardship and have lost family members. This turned out to be a good time to encourage them and help bring the healing and comfort of God’s love to them. Sadly, during the sharing, many mentioned dads that drank too much and were abusive. The lack of a stable and loving family leaves its mark even when we can’t see it.

While all the kids were participating, two of the girls in particular started crying. Later on we sat down with both of them again – again with many tears. After our time, without going into the details, one of them was able to fully forgive her dad for much abuse and negligence that he had done to the family. Her big smile afterwards was a clear sign of God’s work in her heart. The other girl, having lost her parents at a young age, has had next to no one to really care about her. While she is still working through some issues, she received comfort, was able to smile again, and said she was doing much better too.

Another highlight of our time at Grace House was with 4 of the kids (pictured below) who have expressed a greater desire for God and understanding His word. It was evident to us that God wsa doing something in their hearts. Initially they said they had some understanding that Jesus died for sin, but they also said their faith wasn’t complete either. They all mentioned that they had committed sin and still had that sin within themselves. Yet each and everyone of them greatly wanted to be free of it, cleansed and to be with Jesus. After sharing the good news of how Jesus fully rescues us from sin and cleanses us on the basis of grace through faith, not of works, all 4 of them said they wanted to make Jesus their Lord and Savior. They were thrilled to know that God’s love doesn’t stop if they aren’t perfect and He will always be there for them.

We have been continuing our discipleship program with the Pa-Oh and Shan groups in Chiang Mai this month. We were thankful to have Joe help lead a group on healing and to also be encouraged by the following testimonies of God working through that teaching.

We also have been able to meet more frequent with 4 families in the south part of Chiang Mai. It’s been difficult to see them often due to the distance but we were also encouraged by them when we saw them step up and share their testimonies while visiting neighbors and the sick. We ask for your prayers for this week as we will do another outreach in the camp with several of the non-Christian families. 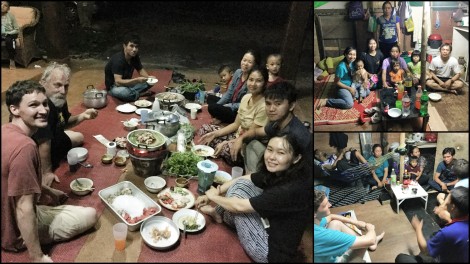 Sharing on Healing, Discipleship and Outreach in the Work Camps

“He heals the brokenhearted and binds up their wounds.”

Thank you and God bless!

Find us on facebook for additional photos and information.