We just recently made a 10 day trip to Tak province with Allan Eubank to minister along the Burmese border.  This is our second trip this year and it’s one we won’t forget.  It turned out to be an amazing trip with a few scary moments and several eternal blessings.

After we arrived in Umphang, we met with the church leaders for prayer and encouragement and then headed over to meet with a newly married couple that was asking for help.  We learned she had many experiences with spirits and idols previously but this changed about a year ago when she was baptized.  This changed about 2 weeks prior as she was under strong spiritual attack and asked the church for help.

When we visited, only the father was home with them.  He wanted to help his daughter and so agreed to hear the gospel from us and God’s word concerning spirits.  After about an hour of sharing, he agreed to pray to receive Christ and before we left, he knew that through faith that Jesus lived in His heart.  We then prayed over the home and the daughter for complete protection and peace from further spiritual attacks. Since the mother wasn’t home, we agreed to come back again after our time in Lay Tong Ku and speak with the mother who had various idols in the house.

On our return, we met again at the house and this time the mother was there.  She allowed the team to share the gospel, and though initially she wasn’t very open, she gradually became more and more with further explanation.  In the end, she and the older kids prayed to receive Christ into their lives.  She even gave up her idol and spiritual items.

Sharing to the Karen family in Umphang

“If we confess our sins, He is faithful and righteous to forgive us our sins and to cleanse us from all unrighteousness.” – 1 John 1:9 (NASB)

Our way to Lay Tong Ku from Umphang included a 3.5 hour hike with all our gear because the constant rain had washed out sections of the road weeks ago.  This wasn’t much of an issue as we made it to the village without incident and that night the team held a time of worship, performed dramas and taught from the bible.  Even in pouring rain, there were still 30+ people that attended the hut we were in.

Tiff with the kids at the Lay Tong Ku Church 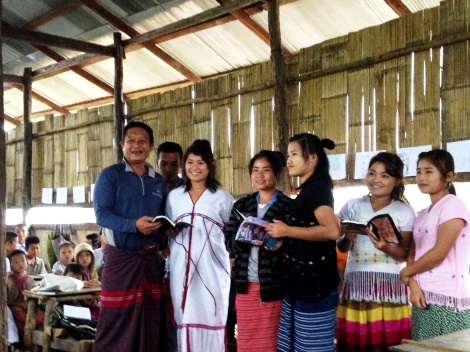 Members of the clinic and church singing a special song Sunday

That Sunday turned out to a busy and wet day too, with it raining nonstop and areas flooding.  After the church services, we met with the spiritual leaders of the Talako religion.  After several hours of discussion, we were not able to reach an agreement on the means of salvation and the need to remove all idols.  Fear is a big part of this as they have never known anything other than their current belief system.  But with that, we prayed God would give them wisdom and grace.

As we were hiking back in the rain to go to Umphang, we arrived at bridge we had walked across just 2 days before.  This time, the bridge was basically gone due to rushing flood waters.  Since we were traveling with 3 Karen Free Burma Rangers (FBR are trained in jungle survival and surveillance), they proceeded to build a bridge from bamboo, vines, etc. With our new bridge spanning across most of the river, one of the FBR members jumped off into the water and proceeded to build from that end.  As he was securing another long piece of bamboo to make the bridge span the whole river, the bamboo poles broke and he fell into the strong current and was quickly swept away. We thank God he was able to swim to safety on the other side of the river.  With half our team deciding to go back to Lay Tong Ku at this point, the rest of us decided to wait and see if the water level would drop.

The washed out bridge coming back from Lay Tong Ku

Building a new bridge from bamboo

With a little more recon, we had found a better crossing.  And at about 4pm, we set out.  The first section required us to walk 10 yards into the river before hopping up on a downed tree while using a bamboo pole to guide us.  After we made it across, the second ‘easier’ section was just as big as the first because of the rain.  It was dusk now but we had already committed ourselves. So we made a bridge to some trees in the middle of the flooded river.  Then we hauled a few more bamboo trees across to span the last 10 yards to the other side. Thankfully, we all made it safely across before dusk, minus a few items that fell into the river.

As we were heading back to the road with it almost completely dark, we came to an unexpected ‘third’ section of raging water!  And without light, we were stopped.  Everywhere we went we found more water.  It appeared we were on an island.  At this point, I mentally braced myself to rest against a tree while standing in water for the night.  As we walked around for higher ground, unexpectedly and a complete answer to prayer, we found an elevated hut that was dry and had everything we needed. And so we stayed the night in this jungle hut on the island. When we awoke the next morning, the water had dropped a few feet and so we quickly headed out.  The raging third section of water was now only a few feet deep and we quickly crossed it.  Soon we were on the road and after an hour of hiking and driving our truck through streams and torn up roads, we finally made it out of the rain!

It did take another 2 days for the water to drop low enough for the rest of the team to cross but in the end we were all safe.  As it turned out, a 6 yard section had washed out on the road to Umphang that caused us to wait longer .  There were also several mud slides and uprooted trees that had blocked the road back to Chiang Mai… but we did get home!

“Yet those who wait for the LORD will gain new strength; they will mount up with winds like eagles, they will run and not get tired, they will walk and not become weary.” – Isaiah 40:31 (NASB)